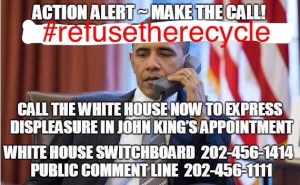 “If you don’t know about the connections that gave him his job, here is some interesting info. King was a friend of NYS Regents Chancellor Meryll Tisch. Tisch is a close friend of Susan Fuhrman, President of Teacher’s College and at the time of King’s appointment, a Pearson stockholder AND on the Pearson Board. So Tisch appoints her friend King, who really had no qualifications for the job, and King gives the HUGE testing contract to Pearson, benefiting Tisch’s friend Susan Fuhrman. Isn’t it always about following the money?”

Info about both of these connections can be found here:

“Obama’s appointment of King, first as a “Special Adviser” rather then Deputy Secretary and then as “Acting Secretary” was done to protect King from the scrutiny of a Senate Hearing. The bigger problem is that Obama is using this tactic to further circumvent the appointment process to high level cabinet positions as expressed in the US Constitution. If Americans do not speak up louder, and express outrage over Obama’s appointment of John King, both as a violation of the US Constitution, and a violation of the will of the people, then what next? It is no longer backroom “czars”, it is a blatant disregard for America’s hard fought democratic process.”

Every day more outrageous dirt surfaces on these people put in charge of our children and their futures. Is this okay with you? This is the country’s new education leader. Angry yet? 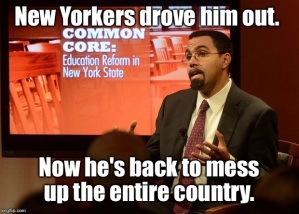 We are not gaining ground.