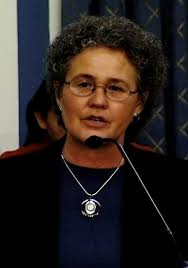 This is the fourth in a countdown series of introductions, a list of the top ten scariest people leading education in America.

Don’t be fooled by her sweet-baby face.  Linda Darling-Hammond stands for one thing:  forced national redistribution of wealth.

And does Darling-Hammond wear  powerful hats!   A pillar of the Common Core movement, she’s been helping run closed-door meetings of the standards since before they were created, as a member of the Council of Chief State School Officers (CCSSO) Advisory Group since 2006.  She also leads (or plays key advisory roles) in all top educational bureaucracies, both governmental and corporate, including The Obama Administration, the National Governors’ Association, the  Common Core testing consortia,  CSCOPE, WestEd, the American Institutes…