This really struck home.
This is kindergarten of today.
This is a real photo submitted by a teacher of her four and five year olds.
This is the new kindergarten. They often have hours of homework and learn algebra. They often have no recess and no time for play. They have bubble tests, though they cannot yet read or write. This is their introduction to a lifetime of learning under the common core agenda.

The teacher who submitted the above photo also submits some shocking description. This is beyond upsetting.

“That is in NY, taken last year during one of the many benchmark tests given in K. We have to put the dividers up so they don’t “cheat”. They are fill in the bubble in math and circle the correct answer in ELA. These are all tests from common core programs and are used for APPR. My kids have to test like this at least once every 2 weeks and sometimes more. The worst was the end of the first week of school when I had to administer 2 baselines (one math, one ELA) which took at least 2 1/2 hours of our time over 2 days. It made 2 of them cry (NO ONE had cried up until then) because they didn’t know any of the answers and some couldn’t even hold a pencil and didn’t even have the skills to choose an answer or how to even fill in a bubble. Subjecting 4,5,and 6 year olds to multiple choice tests is completely developmentally inappropriate because even if they know the answer they become confused when having to pick the right one. And it really has no value to me as a teacher because so many times I have seen kids who know the answer and bubble in the wrong bubble! And the flip side is true also for kids when they don’t really know the answer but they got lucky and picked the right one! There is also a lot of trickery. For example having the kids listen for the first sound in a word and suddenly switching to finding the last sound. Or when in the math curriculum when u teach ordinal numbers and the kids have to count object 1st 2nd 3rd etc from left to right and then the test flips it to finding the 3rd car behind a stop light which is on the right side so the kids have to count in reverse than what they were taught in the curriculum and they all get it wrong! And you know as their teacher they know the answer! So all of this is a waste of time and I have to find the time to give meaningful assessments that I can actually use but there really isn’t much time for that because I have to teach!”

Why is this happening? Because Bill Gates wants to whip the children in our country into shape, in order to “compete in a global workforce”. He is molding our education system in his absurd, tunnel visioned way, to emulate China. China, where children are in full time daycare from several weeks of age, and their careers are picked for them by the government. This system boasts one of the highest student suicide rates in the world.

As per Arne Duncan, possibly the most out of touch man in the USDOE Education system, yet the head of it all nonetheless, “we should be able to look every second grader in the eye and say you’re on track for college. Or you’re not.” So first grade and even kindergarten have to be college and career ready. Does that not sound like a bad science fiction plot? Orwell himself wouldn’t believe what fed led Ed has unleashed.

When we were children we played, napped, learned, and grew as young children. Proper and age appropriate education were a given. That has changed in the last few years. Big brother has taken over, and he wants them young.

“My kindergartners had their standardized computerized test today.

There were over 100 questions. Answers were selected by drop and drag with a trackpad, no mouse is available. One class took five hours to finish. Kids crying in 4 of 5 classes. Multiple computer crashes (“okay, you just sit right there while we fix it! Don’t talk to anyone!”). Kids sitting for half hour with volume off on headsets but not saying anything. Kids accidentally swapping tangled headsets and not even noticing what they heard had nothing to do with what they saw on the screen. Kids having to solve 8+6 when the answer choices are 0-9 and having to DRAG AND DROP first a 1 then a 4 to form a 14. Some questions where it was only necessary to click an answer but the objects were movable (for no reason). No verbal explanation that you must click the little speaker square to hear the instructions. To go to the next question, one clicks “next” in lower right-hand corner…..which is also where the pop-up menu comes up to take you to other programs or shut down, so about many shut-downs or kids winding up in a completely different program.

If this is not what you want for your kids and grand-kids, you’d better start making some noise. Ten years ago we would’ve thought this would be literally impossible.”
This is kindergarten people! This is what it has become between the Common Core Standards and high stakes testing.
This is a good way to create students who don’t want to go to school and think learning is hell.”

“Developmentally, problem two was impossible for her entire first grade class. Mrs. Jones’ mind went back thirty years to her university days where she first learned Jean Piaget’s theory on cognitive development. Children’s brains develop in stages and her class hadn’t reached the stage where they could answer these questions.
Trying to teach her 6-year-olds how to answer a fourth of the problems on this test would be a cognitive impossibility. It would be like reasoning with a newborn that a ball you showed her still exists now that you’ve put it behind your back. For the newborn, it no longer exists. Her brain hasn’t wrapped around the concept of object permanence.
Mrs. Jones walked around the room, noticing some children haphazardly coloring in bubbles, not worrying about which answers they got right or wrong. But her brightest students were reduced to thumb-sucking and emotional upset, stuck on questions that their little minds wouldn’t be able to answer for several more years.

The teacher’s heart ached for her children. She wanted to help explain the cryptic questions, but there was an observer in the room, insuring she could do no such thing. The Common Core tests had to be administered without assistance.”

“Last week I published some kindergarten schedules from school district Web sites that showed just how much kindergarten has changed in recent years as the drive to push curriculum down through the grades has gathered steam. Rather than learn through structured play, which is how experts say young children learn best, 5- and 6-year-olds are being asked to sit doing math, reading and writing for hours at a time, sometimes with no recess or a very short one. Some teachers have dispensed with snacks during half-day kindergarten because there just isn’t any time. Many kindergartners take home homework every day.”

“2. Because the CCSS put such an emphasis on structured test taking in the areas of math and language skills, children have little time for unstructured play. As Sheninger recalls growing up in rural western New Jersey he is reminded of the countless hours he spent outside playing and exploring, experiences which he believes molded him into the person he is today. With so much time devoted to homework, elementary aged kids have much less time for activities outside of class critical in endowing them with the self-esteem, inquisitive nature, and problem-solving skills they need to develop into successful adults.

3. CCSS ARE AGE INAPPROPRIATE
With such an emphasis on college-readiness, the CCSS are not in line with the development of K-3rd graders nor are they based on research about how young children actually learn, according to a document produced by the non-profit organization Defending the Early Years published on washingtonpost.com. Defending the Early Years argues that the CCSS require children to learn discrete facts and skills for which they are not ready, causing stress and devaluing the importance of social-emotional development.”

“One of the most distressing characteristics of education reformers is that they are hyper-focused on how students perform, but they ignore how students learn. Nowhere is this misplaced emphasis more apparent, and more damaging, than in kindergarten.
To make matters worse, the drafters of the Common Core ignored the research on child development. In 2010, 500 child development experts warned the drafters that the standards called for exactly the kind of damaging practices that inhibit learning: direct instruction, inappropriate academic content and testing.
These warnings went unheeded.” 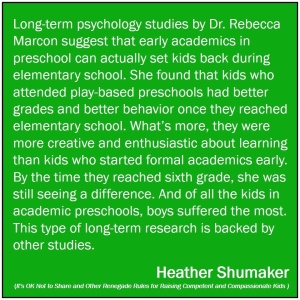 Each year, I have been required to spend more time attending classes and workshops to learn about new academic demands that smack of 1st and 2nd grade, instead of kindergarten and PreK. I have needed to schedule and attend more and more meetings about increasingly extreme behaviors and emotional needs of children in my classroom; I recognize many of these behaviors as children shouting out to the adults in their world, “I can’t do this! Look at me! Know me! Help me! See me!” I have changed my practice over the years to allow the necessary time and focus for all the demands coming down from above. Each year there are more. Each year I have had less and less time to teach the children I love in the way I know best—and in the way child development experts recommend. I reached the place last year where I began to feel I was part of a broken system that was causing damage to those very children I was there to serve.”

But, if you’re not yet convinced that the implementation of Common Core education standards and high stakes standardized testing in kindergarten is a particularly cruel thing to do to 5-year-olds, please take some time to click through a few of these links…..”

(Highly recommend you read this piece and all embedded links).

It gets no better in first and second grade. Worse, worse.

Please read these critiques on the kindergarten common core, and remember, “full steam ahead!”